My story of how I develop my Kolkata painting series, a time travel since 2001 still now!

Kolkata! The city of joy! The place of my heart! From where my artistic journey had begun and still going on. Today it’s a much exciting context for me to share everything from the beginning that how I developed my Kolkata painting style evolving this city! I won’t go only year by year, that would be boring! Rather than that I will also tell few notable places, my painting mediums and subject wise, specially Kolkata’s culture, famous locations, heritage, historical locomotives that has impulsive charm to get created into paintings with the passage of time. 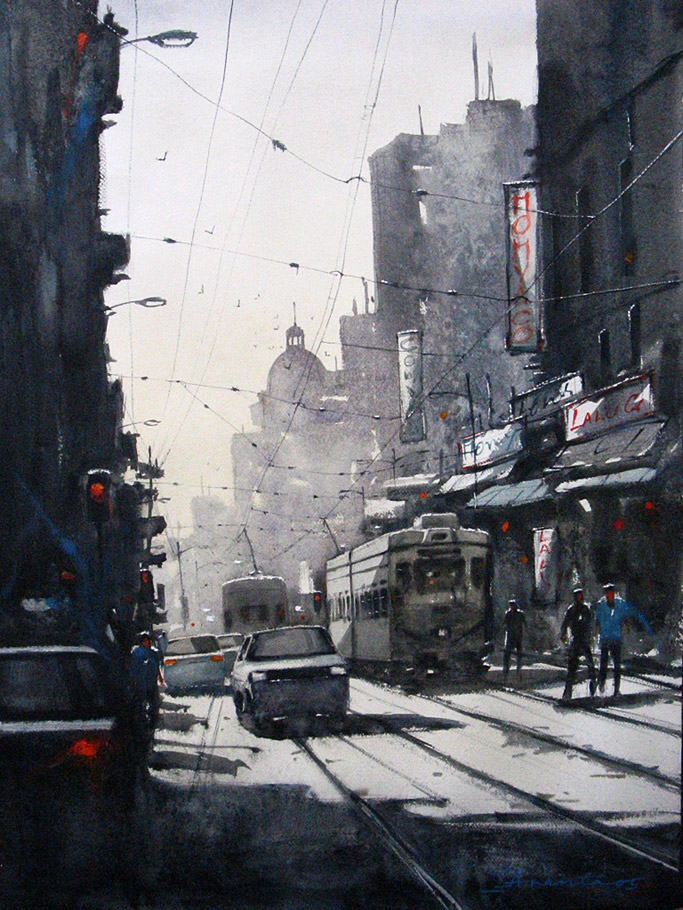 To start about the Kolkata painting I would have to say a brief from when I started living in Kolkata, it was from the year 2001 when as a student I got admission in Govt. College of Art & Craft, Kolkata. My college hostel was in Jadulal Mullick Rd, Jorabagan, Kolkata which was an old architectural building from the British period of Calcutta that time. Also the surrounding areas had that nostalgic impression from the Old British period time, even now it still has! Being an Art student for me it was an ample of opportunities to study these areas and street lives very closely.

So I was in hostel for long 6 years and back in those days my outdoor sessions were mainly based on capturing compositions of streets on my college to hostel route and surrounding areas, like I used to practice the everyday life scenes in Bara Bazar, Satyanarayan Park, Ahiritola, Nakhoda Masjid area, Howrah Station etc and other places. The streets are always busy with working people, hand pulled rickshaws, vintage tram, yellow taxis and with the hustle and bustle of city life. I remember how every day I went out and study these areas. I would have every possible areas sketched as my subject that I found in my artistic eyes back in those days. So from these activities I gradually started to do Old Kolkata Paintings and progressively I developed this into a series. My old Kolkata Painting series mainly portrays those areas that I mainly studied during my college time as a student. Where I had captured many moods of the old Kolkata in different day times. Specially which you can see in my paintings of different streets of Bara Bazar and surrounding areas as I told before.

First I started Kolkata city paintings on simple pencil sketches. Then I progressed it in watercolor medium. Though being a student it took lot of hard work but at the same time it was a point of satisfaction for my artistic spirit. I used to practice Kolkata City Paintings in watercolor in various moods of the day. It was a true inspiration to improve my watercolor style being in college and specially in hostel those days. I still believe hostel was an Art hub! There was 55-60 students who lived in hostel that time starting from first year to masters degree. So many artists working, sharing knowledge and improving style under one roof top from day to night! So with time I have made several paintings of Kolkata in watercolor. I love to capture every mood of Kolkata city. Whether it’s a rainy day or winter morning or a simple sunny day, you can see every mood and atmosphere of the city in my Kolkata watercolor paintings. 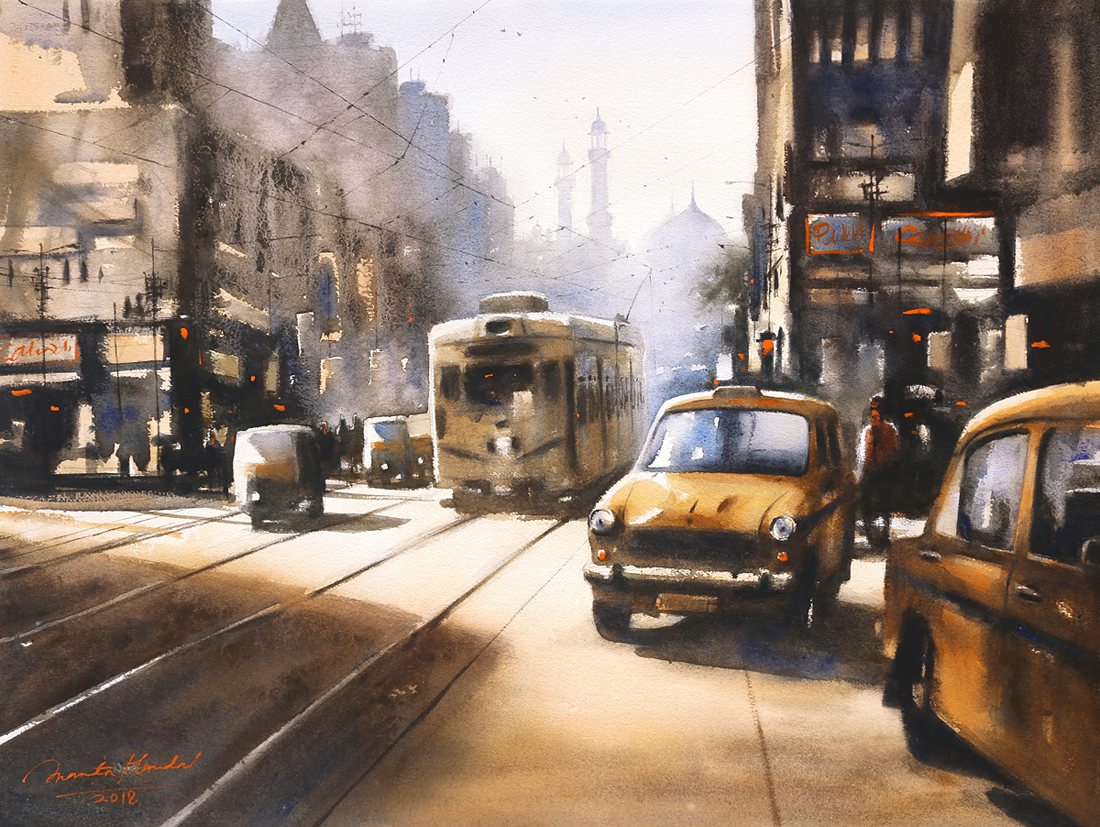 Besides doing Kolkata watercolor painting, I also started to capture the city life in my Acrylic Kolkata paintings as well. After I became stable to capture Kolkata life in watercolor I moved forward to this medium! So I started to do Kolkata Paintings on Acrylic on Canvas. Kolkata’s city life became one of my main subjects. 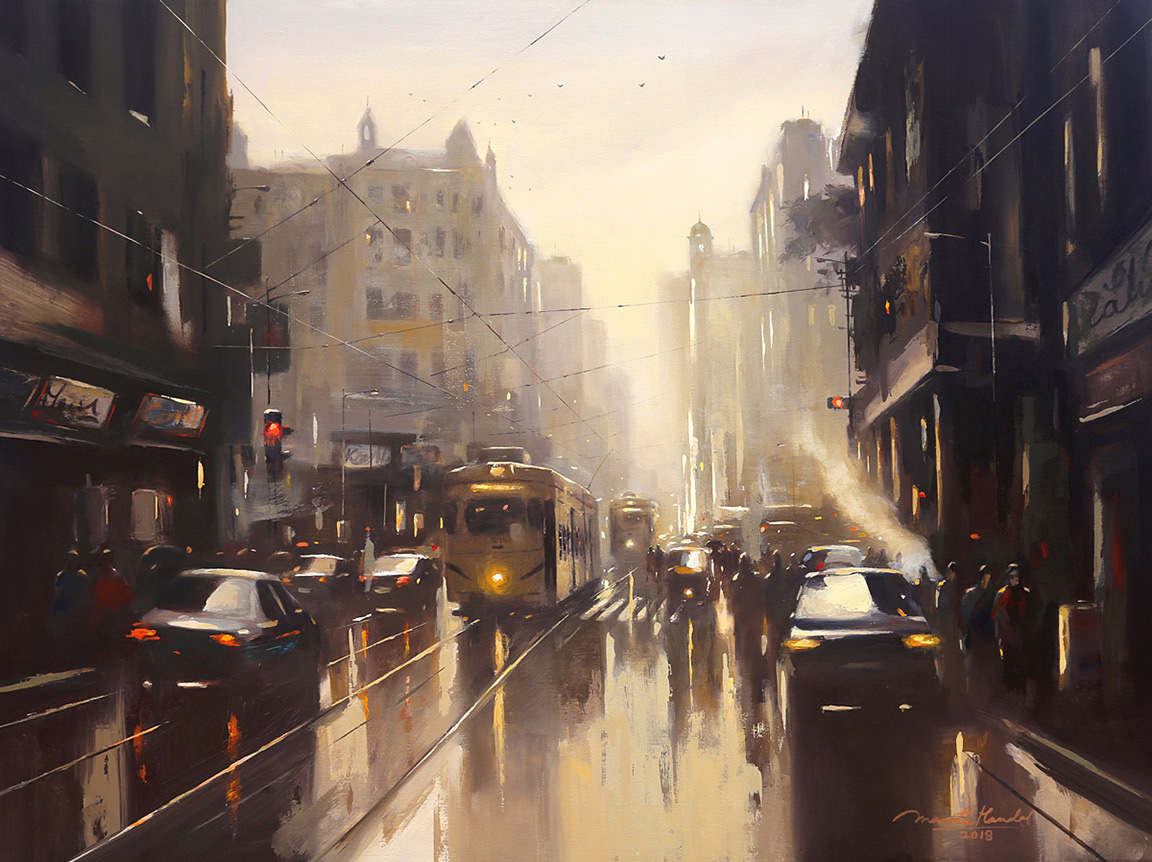 I didn’t stop capturing Kolkata’s city life only on Watercolor and Acrylic medium. Later I developed my painting style on oil on Canvas too. So there are few special things out of the treasure box which I have to mention anyway. That you will find in my paintings mostly!

Durga puja is pure bengali love. It’s an emotion truely connected to this festival since my childhood. It is also known as Durgotsava or Sharodotsava which is celebrated in the Bengali calendar month of Ashwin to pay homage to goddess Durga and her victory over Mahishasur. Being a bengali and then an artist I thoroughly enjoy doing my Durga puja series paintings. I first did my Durga series painting long back ago in my college days. In Durga puja festival the most fascinating moment is the last day of goddess immersion followed by the sindoor khela. 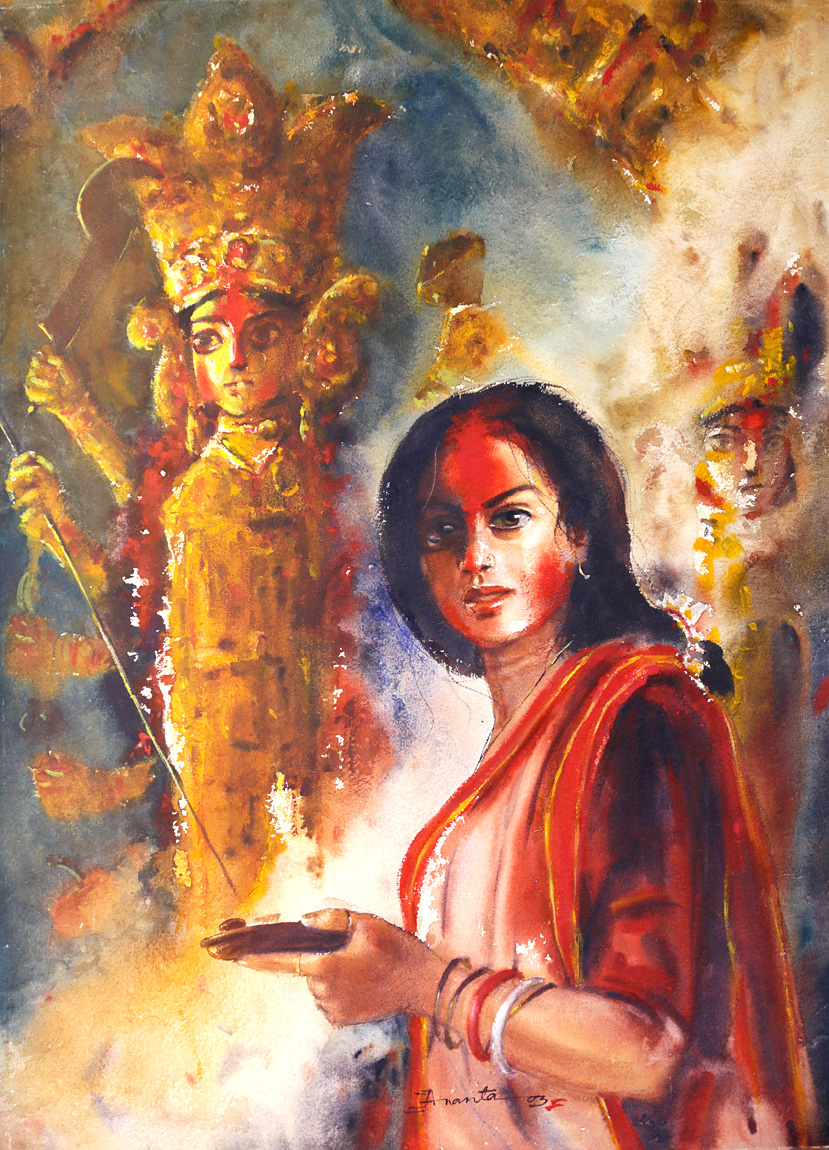 The last day is also called Vijaya dashami . On this day womenfolk dressed in white saree with red border smear sindoor on the Durga idol as well as on each other’s face to seek blessings for their families. It is an amazing sight to enjoy. This celebration is specially connected to my heart as since childhood I have seen my mother and other women to celebrate sindoor khela and seek blessings from maa Durga for her families health and prosperity. I have always found this moment as a joyous celebration of feminism. This ritual is so beautiful to admire. That’s why in my Durgaa series paintings you will feel that affection of womanhood on the day of Bijoya Dasami, where maa Durga idol symbolise the power and blessings.

So many of my Kolkata city paintings there you will see tram on the road. This has a special space as the vehicle itself has its own beauty and a history that is still going on. If you know the history of the Kolkata tram, you may know it is the oldest existing tram network operating in India, and the first city to get its electric tram in Asia which was started in 1902. The city has also witnessed tram being driven by horse once upon a time. That is why tram is one of the exemplars of Kolkata’s rich historical past and glory of the city. With many people travelling daily it has become the Life line over the heart of the City! Few of those historical paragons without which the first capital of India, Calcutta can’t be imagined, Kolkata Tram is one of them.

With all these uncountable aspects the vibes won’t be enough if I don’t add tram on my paintings. During my study session I used to visit Kolkata Maidan area, B.B.D Bagh tram depot, Kalighat tram depot, Ballygunge phari tram line areas to observe the vehicle movement closely on the roads. The dark tone of the vehicle surrounded by warm lights and a nostalgic set of windows and gate makes it more attracting to get paint. Irrespective of the mediums it creates the same beautiful weight on the painting. Also the interesting points are tram line and the electric wires that are aligned over with the tram create a good perspective view in the painting. That’s why Kolkata tram painting always has its incomparable space in my series. It is most amazing when tram passes the road in a slow rhythmic movement with the bell sound everyone steps aside to give it the space, I find it as similar when elephant roves through the dark forest in its royal attitude. 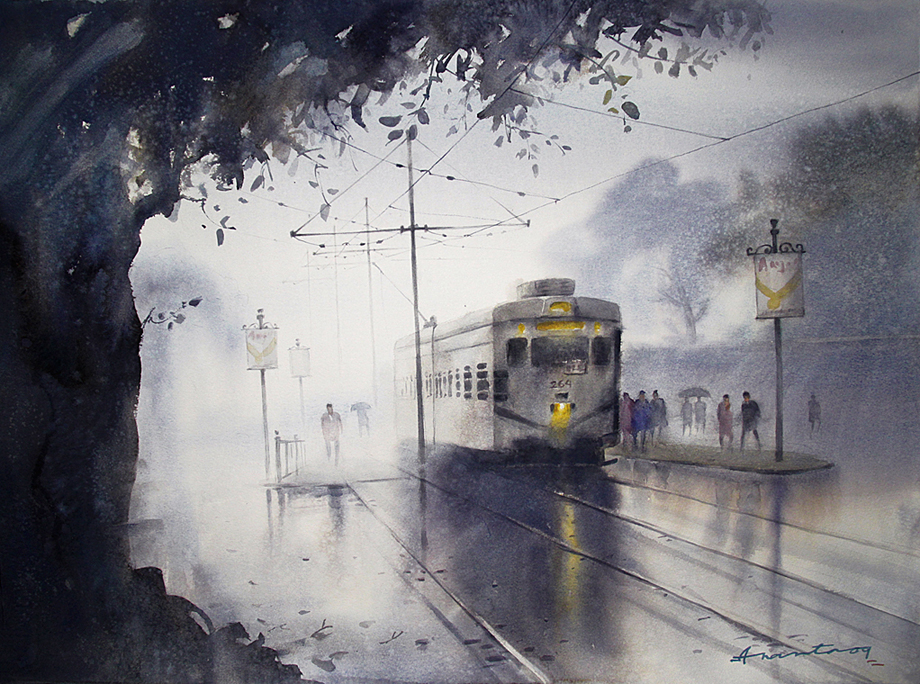 Among other subjects I also have done artworks on Kolkata Victoria Memorial. Like its name this place holds lot of memories of my college days. There is nothing new to say about this place. Victoria Memorial is one of the beautiful remainders of the British Raj in India which is located in the central Kolkata. This soul soothing monument is the heart of Kolkata which was built in 1906 and 1921 dedicated to the memory of Empress Victoria. The serene atmosphere of the white palace followed by a garden and a lake has something to attract you to visit once. 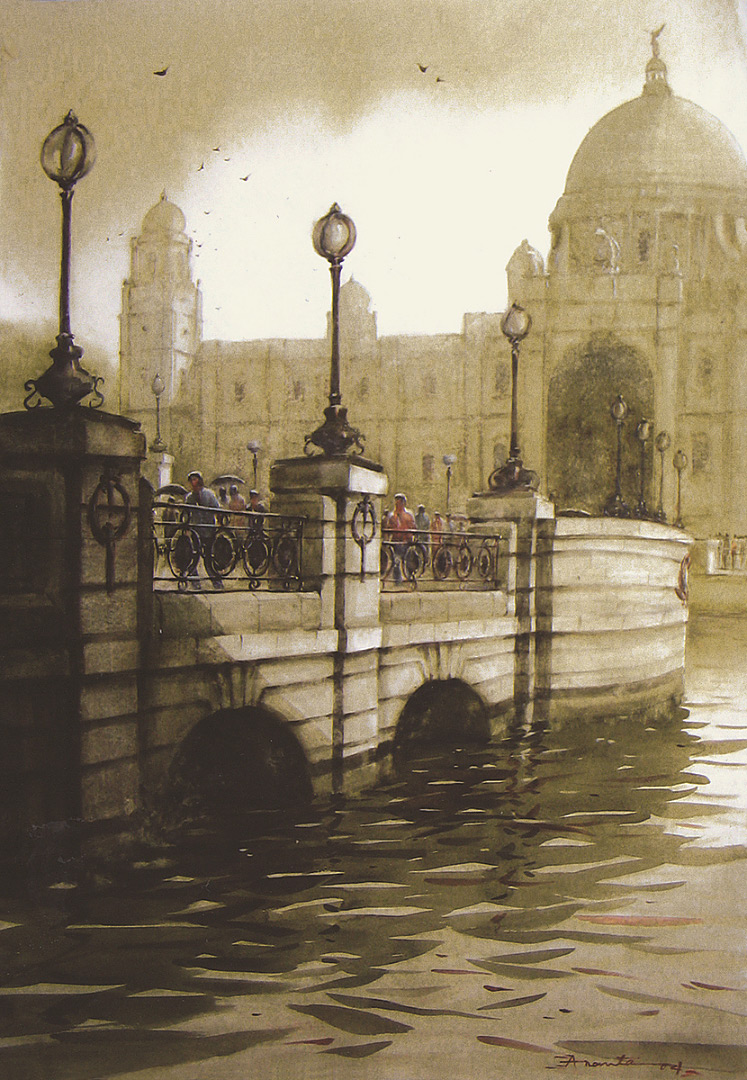 In fact back in those college days I used to visit now and then to Victoria. The large white Makrana marble building of Victoria Memorial is designed in Indo-Saracenic revivalist style which is basically a mixture of British and Mughal elements. It gives such an aesthetical value to the architecture! Because of the white color marble it captures various lights and shades in different time zones of a day. That is why in painting it becomes much more interesting to capture the aesthetic perspective from different angles of the architecture in various lights and shades. More of all the statue of Queen Victoria in front of the palace along with the lake and garden gives good perspective to observe and paint. All over it gives such a royal touch in the mood of the painting.

So the love for this city life and creating them into painting has never stopped. Irrespective of the mediums it draws the same spell. The city has that charm! 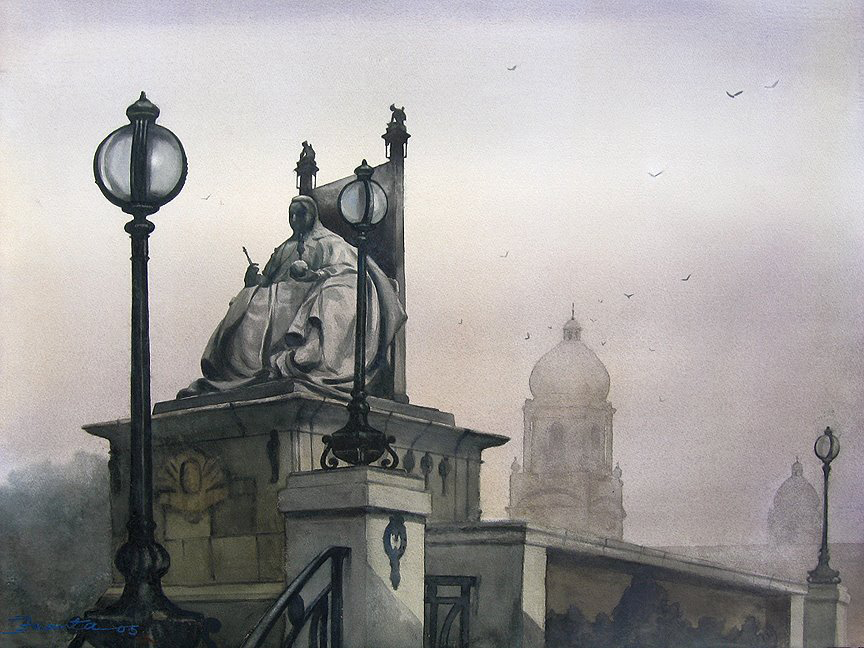 In my Kolkata paintings you will find the old classic architectures of British period, the culture of busy streets, hand pulled rickshaws and muscle men busy on their daily works, Kolkata street scenes, traffic on roads, tram & tramline, the classic yellow taxis and many more objects that reflects the taste of the city. In every mediums in my paintings the different time zones like the morning glow of the city, a simple sunny day on busy streets, the afternoon reflection on the architectures during sunset etc has taken their own space. The various seasons of the city also has its own charm. Like a cozy foggy morning of winter Kolkata, rainy season in the city, festival time to celebrate you can’t miss any! These all you can notice in my paintings.

Hope you enjoy reading my journey of Kolkata series paintings.

Thanks very much for your time for reading, happy painting!

Ananta Mandal is one of the most award winning internationally recognized master Indian artists. Watercolor painting, acrylic painting and oil painting are the mediums he works in

Your email address will not be published. Required fields are marked *

Sing up for our email Newsletters

Ananta Mandal Email NEWSLETTER is only one click away

We respects your privacy, your info and Email address are safe with us, That is our promise to you.