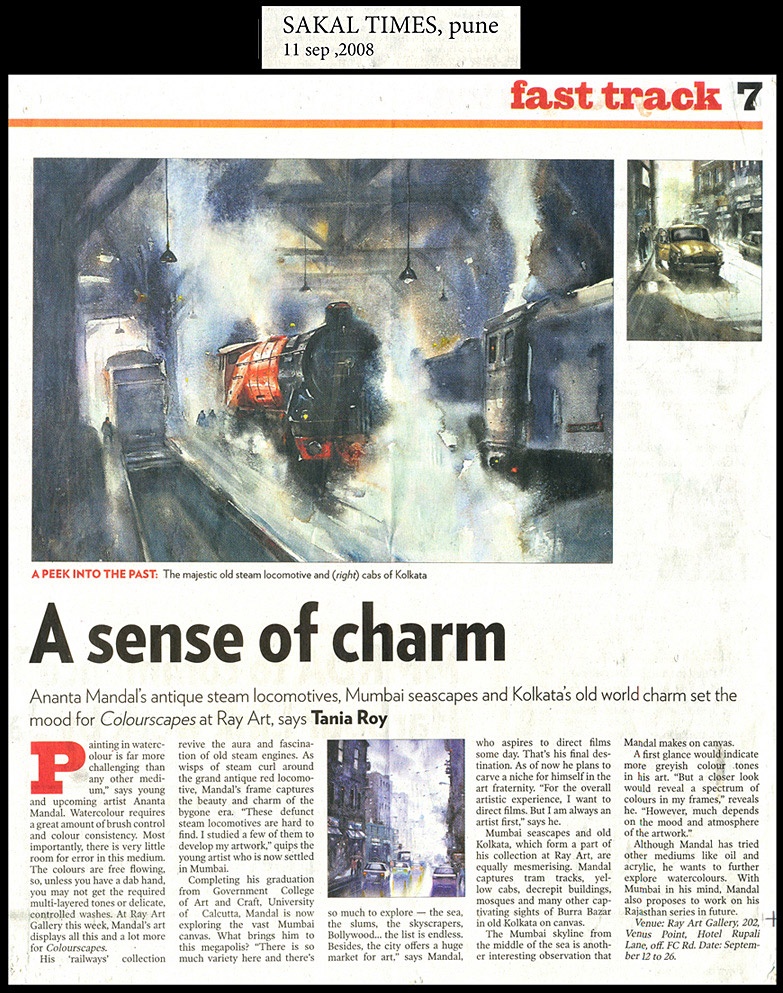 A sense of charm

Painting in water color is far more challenging than any other media,” says young and upcoming artist AnantaMandal. Watercolor requires a great amount of brush control and color consistency. Most importantly, thre is very little room for error in the medium. The colors are three flowing, so, unless you have a dab hand you may not get required multi-layered tones or delicate, controlled washes. At Ray Art gallery this week, Mandal’s art displays all this and lot more for Colors capes.

His ‘railways’ collection received the aura and fascinations of old steam engines. As wisps of steam curl around the grand antique red locomotive, Mandal’s frame captures the beauty and charm of bygone era. “These defunct locomotives  are hard to find. I study a few of them who develop my art work,” quips the young artist who is now settled in Mumbai.

Completing his graduation from Government College of Art and Craft, University of Calcutta, Mandal is now exploring the vast Mumbai canvas. What brings him to this megapolis? “There is so much variety here and there’s so much to explore- the see the slams, the skyscrapers, Bollywood… the list is endless. Besides the cityofferes the huge market for art “saysMandal, who aspires to direct films someday. That’s his final destination. As of now he plans to curve niche for himself in the art fratninity. “For the overall artistic experience, I want to direct films. But I’m always an artist first,” says he.

Mumbai seascapes and old Kolkata, which form a part of his collection at Ray Art, are equally mesmerising. Mandal capture tram tracks, yellow cabs, decrepit buildings, mosques and many other captivating sights of burrabazar in the old Kolkata on canvas.

The Mumbai skyline from the middle of the sea is another interesting observation that Mandal makes on canvas.

A first glance would indicate more greyish color tones in his art. “But a closer look would reveal a spectrum of colors in my frames,” reveals he. “However, much depends on the mood and atmosphere of the art work.”

Although Mandal has tried other medium slide oil and acrylic, he wants to further to explore water colors. With Mumbai in his mind Mandal also proposes to work on his Rajasthan series in future.