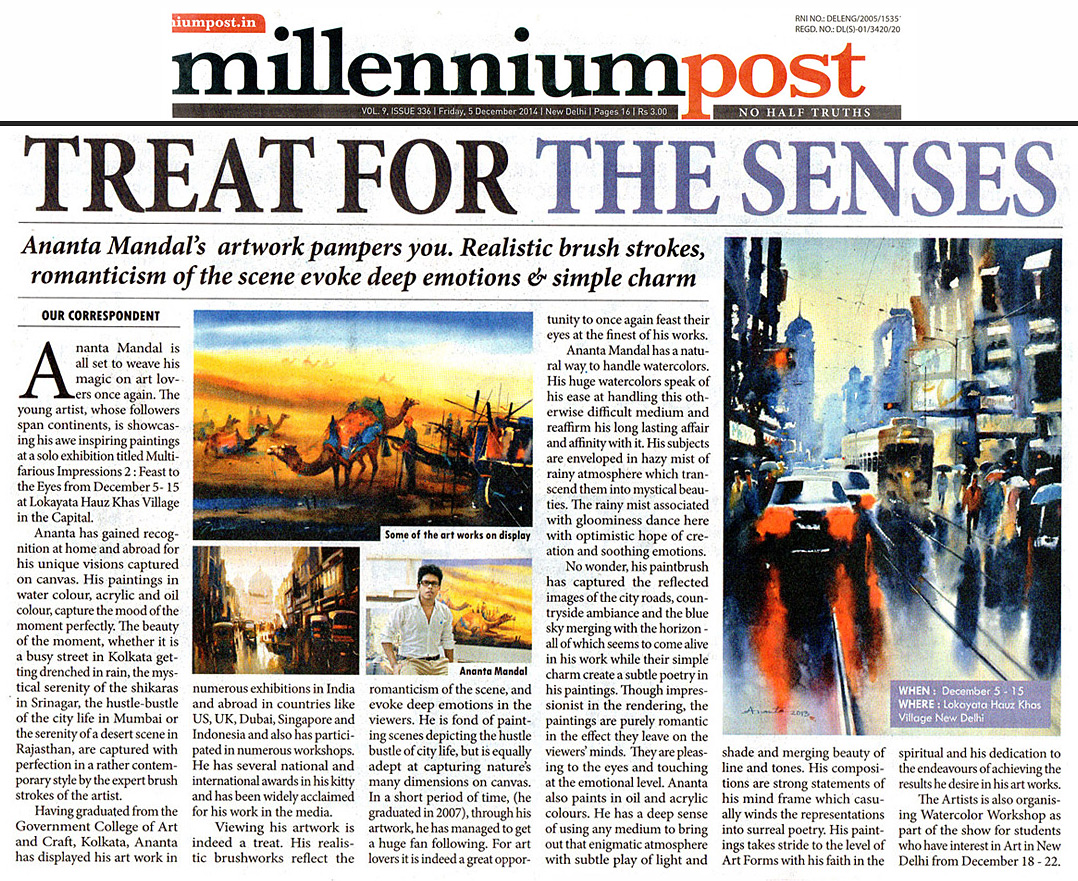 Treat for the senses

Ananta Mandal is all set to weave his magic on art lovers once again. The young artist, whose followers span continents, is showcasing his awe inspiring paintings at a solo exhibition titled Multifarious Impressions 2 : Feast to the Eyes from December 5- 15 at Lokayata Hauz Khas Village in the Capital.

Ananta has gained recognition at home and abroad for his unique visions captured on canvas. His paintings in water colour, acrylic and oil colour, capture the mood of the moment perfectly. The beauty of the moment, whether it is a busy street in Kolkata getting drenched in rain, the mystical serenity of the shikaras in Srinagar, the hustle-bustle of the city life in Mumbai or the serenity of a desert scene in Rajasthan, are captured with perfection in a rather contemporary style by the expert brush strokes of the artist.
?
Having graduated from the Government College of Art and Craft, Kolkata, Ananta has displayed his art work in numerous exhibitions in India and abroad in countries like US, UK, Dubai, Singapore and Indonesia and also has participated in numerous workshops.  He has several national and international awards in his kitty and has been widely acclaimed for his work in the media.

Viewing his artwork is indeed a treat. His realistic brushworks reflect the romanticism of the scene, and evoke deep emotions in the viewers. He is fond of painting scenes depicting the hustle bustle of city life, but is equally adept at capturing nature’s many dimensions on canvas. In a short period of time, (he graduated in 2007), through his artwork, he has managed to get a huge fan following. For art lovers it is indeed a great opportunity to once again feast their eyes at the finest of his works.

Ananta Mandal has a natural way to handle watercolors. His huge watercolors speak of his ease at handling this otherwise difficult medium and reaffirm his long lasting affair and affinity with it. His subjects are enveloped in hazy mist of rainy atmosphere which transcend them into mystical beauties. The rainy mist associated with gloominess dance here with optimistic hope of creation and soothing emotions.

No wonder, his paintbrush has captured the reflected images of the city roads, countryside ambiance and the blue sky merging with the horizon - all of which seems to come alive in his work while their simple charm create a subtle poetry in his paintings. Though impressionist in the rendering, the paintings are purely romantic in the effect they leave on the viewers’ minds.

They are pleasing to the eyes and touching at the emotional level. Ananta also paints in oil and acrylic colours. He has a deep sense of using any medium to bring out that enigmatic atmosphere with subtle play of light and shade and merging beauty of line and tones. His compositions are strong statements of his mind frame which casually winds the representations into surreal poetry. His paintings takes stride to the level of Art Forms with his faith in the spiritual and his dedication to the endeavours of achieving the results he desire in his art works.

The Artists is also organising Watercolor Workshop as part of the show for students who have interest in Art in New Delhi from December 18 - 22.