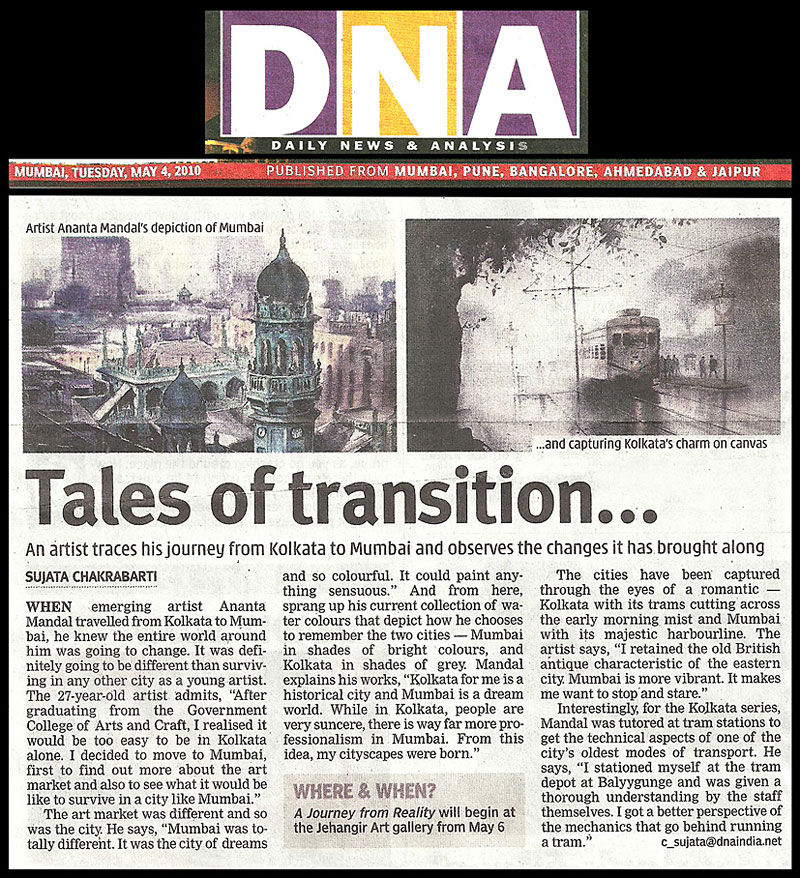 When emerging artist Ananta Mandal travelled from Kolkata to Mumbai, he knew the entire world around him was going to change. It was definitely going to be different than surviving in any other city as a young artist. The 27-year-old artist admits, “After graduating from the Government College of Arts and Craft, I realised it would be too easy to be in Kolkata alone. I decided to move to Mumbai, first to find out more about the art market and also to see what it would be like to survive in a city like Mumbai.”

The art market was different and so was the city. He says, “Mumbai was totally different. It was the city of dreams and so colourful. It could paint anything sensuous.” And from here, sprang up his current collection of water colours that depict how he chooses to remember the two cities — Mumbai in shades of bright colours, and Kolkata in shades of grey. Mandal explains his works, “Kolkata for me is a historical city and Mumbai is a dream world. While in Kolkata, people are very suncere, there is way far more professionalism in Mumbai. From this idea, my cityscapes were born.”

The cities have been captured through the eyes of a romantic — Kolkata with its trams cutting across the early morning mist and Mumbai with its majestic harbourline. The artist says, “I retained the old British antique characteristic of the eastern city. Mumbai is more vibrant. It makes me want to stop and stare.”

Interestingly, for the Kolkata series, Mandal was tutored at tram stations to get the technical aspects of one of the city’s oldest modes of transport. He says, “I stationed myself at the tram depot at Balyygunge and was given a thorough understanding by the staff themselves. I got a better perspective of the mechanics that go behind running a tram.”